On the landless planet of Sea Forest, where all life is supported within the giant trees that grow from the ocean’s floor…

The Madera farm lay within half a day’s boating through the smaller channels flowing from the town of Seastar, where Tarov’s flotilla had docked for their performance. Tarov had borrowed a small punt and poled it to the farm herself, out of practice in the maneuvering of it, but with enough stamina from dancing with her ‘ka that she managed to arrive without mishap.

She peered through the foggy mist toward the upper branches of the mammoth sea trees. Braq Madera should be up there, bone-hoe in hand, cultivating the moss which provided most of the income for the small farm. She struggled to contain her disappointment when she didn’t see him, then quickly scanned the shallow tide pools flourishing within the roots of the trees. He might be harvesting the animal and plant life living inside them.

Perhaps he had even found the magical zabbaroot, Tarov mused. Braq had once told her he dreamed of finding one of the rare trees that grew the root. He intended to be wealthy even if he had to smuggle it beneath the noses of the royals, who claimed the root belonged under control of the king.

Within the zabba lay the power to See, Hear and Shape…to control the unpredictable elements of this landless world so humans could survive. And more importantly to Tarov, the magical properties of the zabbaroot gave her the ability to dance with the ‘ka, her leviathan bone instruments. The royals eagerly funded the arts with zabba, and Tarov often wondered who had been the first to create the ‘ka from the bones of the sea monster. It took a great amount of the power to See into the bone of razor-sharp edges and cut them to size, then carve out a hole within it. Once the main airway was created, more holes on the outside of the tube created even richer music, although more than thirteen holes dissipated the sound. It also took an inhuman amount of Strength to spin the rope attached to the bone with enough force to make the wind pass through, creating the haunting music for the dance. But no amount of power could smooth the dense edges of the bone, which made the wielding of them so dangerous.

Tarov couldn’t be sure which aspects of the moon dance the royals prized the most.

With trembling fingers, she smoothed down her frizzy brown hair, adjusting the headband that attempted to keep it in place. She yanked at the strip of spider silk covering her small breasts, and then adjusted the matching bottoms. Bereft of its veils, her dancing outfit looked plain; she’d twined strings of striped marbela shells around her neck for decoration.

Yet she’d worn her costume on purpose, for moon dancers never lacked for companionship. The homeliest of women who wore the rare purple silks and sported the myriad scars of a dancer found themselves much sought after. And Tarov needed all the confidence she could get to face her ex-lover.

She tied her flat-bottomed boat to the small landing before climbing up the ladder to the top of the tree’s roots. Tarov took a deep breath of courage and then strode along the trail of interlaced limbs that led to the home’s front balcony.

When she stood a few paces away, the door suddenly opened.

“Tarov Jin’nidea,” whispered Henel, her blue eyes wide with surprise. Her sculpted mouth hung open prettily, revealing even, white teeth. Gold hair lay in masses of smooth curls along her shoulders, flawless skin flushed a rosy pink as she threw herself forward and hugged her friend.

Tarov fought a pang of envy, for Henel looked even more beautiful than she remembered. “It hasn’t been that long,” she murmured.

“Yes, it has,” pouted Henel. “All these years, with not a word from you, then suddenly you’re at my doorstep!”

Tarov shook her head in annoyance. “But you sent for me, Henel. The message said it was an emergency.”

“Oh, well, I suppose I did. But it was so long ago; I didn’t think you’d come. I heard you’ve been traveling, training as a dancer, and felt sure you wouldn’t--couldn’t take the time. By the moons! Let me look at you.”

They stood apart, Tarov knowing what the other woman saw: the frizzy hair, the muddy brown eyes flecked with green, the wide mouth, and the even wider nose and forehead.

“You look...like Tarov,” she finally said with a dismissive shrug, although her eyes narrowed speculatively at the moon dancer costume and the tiny scars. She waved Tarov into her home of hollowed-out tree bark with a proprietary tilt of her chin.

Tarov stopped at the threshold and abruptly realized this would be harder than she’d thought. Some things time cannot dull. Her memories of this humble farm, the days she’d spent behind that bedroom door--the feel of Braq in her arms--rushed at her with astonishing clarity. This place had once been her little bit of paradise. As long as Braq Madera had shared it with her.

Tarov tried to ignore the changes Henel made to the front room. Drawings of Braq and Henel graced every wall, and one large work with just Henel in a flowing gown hung over the mantel of the fire shell. New furniture had replaced the old. The rickety table where Tarov and Braq had eaten, laughing as the surface wobbled enough to spill their drinks, had been replaced with a polished, sturdy one of carved rose-bark. Driftwood chairs with fluffy cushions replaced the old, lumpy ones.

Henel had made sure to put her personal stamp upon the entire room.

But Braq’s old leaf-carved chest still sat against the varnished tree wall, a gift from his father when Braq left home to find his way in the world. Tarov’s throat tightened when she remembered the day he’d finally shown her the contents. It held drawings of his mother, father, and brothers. A stack of lace and linens his mother had sewn. And at the bottom, a box with a ring of polished amber Braq said would one day be hers, as soon as he made enough money to support them…

Tarov looked down at Henel’s hand. The ring--her promised ring--wrapped the girl’s left middle finger. Her heart felt like it held the weight of a narwhal. Why had she ever come?

“Where is he?” she asked, not caring what Henel thought of her bluntness.

Henel’s blue eyes narrowed, then widened in surprise. “I thought you’d heard,” she replied, elegantly flipping her fingers in the air. “He died.” 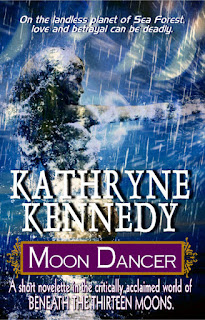 www.kathrynekennedy.com
Posted by Author Kathryne Kennedy at 11:17 AM 2 comments: 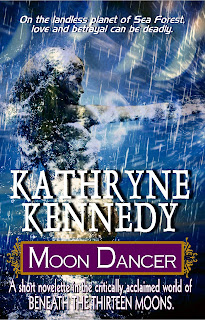 In MOON DANCER, enter the landless planet of Sea Forest from BENEATH THE THIRTEEN MOONS, where love and betrayal can be deadly. In the bonus story, THE DISENCHANTED LOVER, enter the magical world of Victorian London from the RELICS OF MERLIN series, where passion always trumps enchantment.

MOON DANCER: Tarov is a skilled dancer, wielding the deadly instruments crafted from the bones of a sea monster. Henel has stolen Tarov’s man in the past, and now seems intent on not only taking Tarov’s place as lead dancer, but her new lover too. Will Tarov lose everything to treachery? Or will the magic of Sea Forest help her find happiness?

THE DISENCHANTED LOVER: When Lady Rose Cheevers impulsively casts a spell and brings her husband back from the grave, she’s horrified to discover he’s not the angel she thought. When she seeks out the roguish thief, Mister Drake Pann, to help rid her of the demon, she discovers a new passion for love that may have everything to do with enchantment…or nothing at all.

"In Moon Dancer, Ms. Kennedy returns to the erotic, verdant world she created in her novel Beneath The Thirteen Moons. She is clearly comfortable returning to this setting as she easily slips the reader into the aquatic planet whose inhabitants worship the sea and live in massive trees. The result is a crisply told tale of love, jealousy and betrayal unfolding in a troupe of moon dancers, skilled performers of a beautiful and potentially deadly art form.  Of course our heroine Tarov gets her man, but will she lose her identity in the process? Moon Dancer is one part sci-fi thriller, one part love story and one part Shakespearian drama, all wrapped tightly into a dense yet easy to read short story."
--David Benz, Edgar-Nominated Author
https://www.amazon.com/dp/B074R988MZ/

About the Author:
Kathryne Kennedy is an award winning, best-selling author critically acclaimed for her world building and blending genres to create groundbreaking stories. She’s lived in Guam, Okinawa, and several other states within the U.S., and currently lives in Arizona with her wonderful family—which includes a Yorkie and a part-Chihuahua rescue dog. She loves to hear from readers, and welcomes you to visit her website where she has ongoing contests, sample chapters, newsletter sign-up, and purchase links to her books at http://www.kathrynekennedy.com
Posted by Author Kathryne Kennedy at 10:51 AM 2 comments:

Email ThisBlogThis!Share to TwitterShare to FacebookShare to Pinterest
Labels: 99CentEbook, Beneath the Thirteen Moons, Moon Dancer, New Release, The Disenchanted Lover, The Relics of Merlin

Unsure why it's posted in Gothic Romances, but I'll take it. THE LADY OF THE STORM, and THE LORD OF ILLUSION, are currently squeezing in at #14 & 15, respectively.

All three books are on sale for a limited time for $1.99 across all ebook platforms, not just Amazon.

Or search for THE ELVEN LORDS at your favorite e-retailer.
Posted by Author Kathryne Kennedy at 11:48 AM No comments:

Email ThisBlogThis!Share to TwitterShare to FacebookShare to Pinterest
Labels: Ebook Sale, The Elven Lords, The Fire Lord's Lover, The Lady of the Storm, The Lord of Illusion
Newer Posts Older Posts Home
Subscribe to: Posts (Atom)