New Release: ON WINGS OF LOVE by Kim Watters 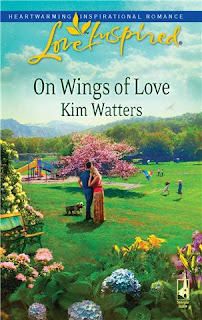 Ruth Fontaine's job is to deliver lifesaving organs to those urgently in need. But the gruff pilot of her charter plane has no kind words for her work. And then she discovers the heartbreaking reason why. Noah Barton lost his wife and young son. Grieving, he gave in to pressure to donate his child's organs--a decision he regrets. He's bitter against those who "take advantage" of people's anguish. Yet he still flies her on her missions, with his beloved dog, Houston, as his copilot. Now Ruth will have to show Noah he has two other copilots: the Lord and her love.

Noah had come for her.

Ruth stepped toward the plane and the man standing near the doorway. She gazed at Noah, at his muscular chest, at his firm lips. The cold, remote look etched across his features signaled that his attitude about her profession hadn't changed.

Sighing, Ruth grabbed the plane's railing and pulled her tired body up the steps. At the top, she held out her hand to his waiting one. "Thanks for coming, Noah. I didn't think anyone would be able to get through in that storm."

Her fingers tingled as they remained connected with his. Without his sunglasses on, Ruth noticed his blue irises deepened to the color of the clearing sky before theydarkened like the receding monsoon clouds.

Her need to soothe away his anguish intensified, but somehow she sensed that Noah wouldn't appreciate her attempt.

Enter to win a lovely necklace at: www.kimwatters.com
Posted by Author Kathryne Kennedy at 6:00 AM 5 comments:

Email ThisBlogThis!Share to TwitterShare to FacebookShare to Pinterest
Labels: Releases

FOR WRITERS: Providing a quote for another author...

It took me several days, but I finally finished providing a quote for another author's book. It's flattering to be asked for an opinion of someone else's book...it means that you've achieved enough success that your opinion is valued. But it can also be quite difficult, especially if you love the book, like I did. My first impulse is just to say, I LOVE THIS BOOK, BUY IT, READ IT! but that's probably been said a thousand times, and could certainly be worded a bit better. My goal is to help a reader make a decision about this book, and I take that seriously.

I always provide the author with two quotes, as I'm unsure what other quotes she may be getting, and that way she can choose if they happen to be in a similar vein. So, here's the book and my quotes:

"This book should carry a warning: don't start reading if you have to go to work the next day. You will not be able to put it down until you finish the very last word at 2 am."~Kathryne Kennedy, Award Winning Author of My Unfair Lady

"The lyrical fantasy of Patricia McKillip, with the heart-stopping adventure of Robin Hobb, spiced with the poignant romance of Nora Roberts--you will not be able to put this book down!"~Kathryne Kennedy, Award Winning Author of My Unfair Lady

I do try to include a quote that compares the book to other authors with similar styles/story lines etc. So that way a reader knows that if they like the books from the authors I mentioned, they'll be sure to enjoy this one too.

ENCHANTING THE BEAST was nominated for RT's Reviewer's Choice Award

My editor from Dorchester Publishing, Leah Hultenschmidt, kindly emailed me to let me know that Enchanting the Beast was nominated for Romantic Times BOOKreviews Reviewers' Choice Award in the Paranormal Historical category.

(I'm also thrilled to know that there is a Paranormal Historical romance category...what I write used to overlap several genres (historical, fantasy, paranormal, romance and sometimes you could even throw in a bit of mystery), and now it has one all to itself. Yay, RT! And, um, if that category existed before, blame me for living under my rock. And, maybe one day there will be a Historical Fantasy Romance category, which truly defines what I write.)

So with this announcement, I'd also like to congratulate my fellow authors in my Desert Rose chapter for their nominations as well: Linda Style, Pamela Tracy & Jennifer Ashley. With such stiff competition, I don't worry about actually winning...I'm just pleased to be listed among such fabulous talent!
Posted by Author Kathryne Kennedy at 6:00 AM 2 comments:

Memory's Edge is a novel that finds Victoria Garrett living in the middle of the War Between the States. Brave and feisty at eighteen, she takes on a mission to smuggle two slaves to the Underground Railroad in Delaware with the help of her parents. But resting along the banks of the Brandywine, she soon finds her venture involves her in an explosion at the DuPont Munitions Factory and being arrested as a Confederate spy.

Captain Luke Cassidy, one of three secret agents sent by President Lincoln to thwart Confederate attempts to steal gunpowder, has different thoughts about Victoria, the only survivor he finds unconscious at the scene, where he notices strangulation marks on her neck. He and his men, invincible together, rescue her and hide her from the person trying to kill her.

Victoria has amnesia caused by the trauma she suffered during the explosion. Alone and frightened, with no memory, she turns to the one person who will save her, Luke Cassidy. Theirs is a tale of murder, espionage and love...280 pages (Sensual)

http://www.thewildrosepress.com/bette-mcnicholas-m-297.html
Posted by Author Kathryne Kennedy at 6:00 AM No comments:

Email ThisBlogThis!Share to TwitterShare to FacebookShare to Pinterest
Labels: Releases

She's the lucky winner of the Night Owl Romance blog contest. I received a very nice email from her after I mailed her the prize:

Kathryne,
I am glad you gave me your email. I just received your package in the mail today. The Cameo necklace is so pretty!! I really
like it!! I will enjoy wearing it!! It looks like an antique. Thanks so much for the contest and great prizes!!
Thanks again, Judy
Posted by Author Kathryne Kennedy at 6:00 AM No comments:

It's always a good thing when an author loves their publishing house, and I've been very fortunate to love mine. The owner of Sourcebooks, Dominique Raccah, is a fascinating woman, who approaches authors and the industry in an entirely different way, and perhaps this is the reason for Sourcebooks fantastic success...especially during a time when most publishing houses are cutting back and/or closing lines.

So it's with a great deal of pride that I'm passing along an article about Sourcebooks that appeared in Shelf Awareness (one of several articles that can be found here: http://news.shelf-awareness.com/mv/a1/804583.html):

Here's how it looks so far:

Sourcebooks has been in the forefront of offering e-books, enhanced books, iPhone apps and just last month launched a poetry website that, Raccah said, is creating a community for people who love poetry--and may be a model for creating revenue. (Among other things, it sells poems for download, iTunes style.)

After deciding a year ago that it wasn't going "to participate" in the recession and that it would have no layoffs, the company involved all 75 employees in extraordinary efforts to build the company's business in a range of measurable ways, including improving cash flow and inventory, expanding markets, working better with customers and more. By doing so, Sourcebooks has tried to take advantage of being "in that funky space between big and small publishers," Raccah said--big enough to have a presence but small enough to be limber and both act and react quickly.

Sourcebooks continues to publish some 300 new titles a year in a range of subjects--test and study guides, poetry, historical and women's fiction, children's and YA books, reference, romance and more--using many e-tools to nurture both readers and writers. The house, Raccah emphasized repeatedly, is publishing "authors, not books," and many of them have become bestsellers. Sourcebooks was founded 22 years ago as a reference publisher.
Posted by Author Kathryne Kennedy at 6:00 AM No comments:

I would like to sincerely thank the following readers for taking the time to post reviews for MY UNFAIR LADY:

"I think this book is very well written and I lost myself in the pages as I imagined myself moving along with the characters as if I was one of them. I quickly found myself finished with this book and wishing it would continue." ~The Book Tree: http://thebooktree.blogspot.com/2009/12/book-review-my-unfair-lady-by-kathryne.html

"If you're looking for a romantic read and a quick escape - this will surely hit the spot!" ~Starting Fresh: http://startingfresh-gaby317.blogspot.com/2009/12/book-review-of-my-unfair-lady-by.html

"It made for some great escapist reading and it was a joyful ride. I will definitely read another of Kennedy's books" ~Jenny Loves to Read: .http://jennylovestoread.blogspot.com/2009/12/review-my-unfair-lady-by-kathryne.html

"If you enjoy reading a good historical, you have to read My Unfair Lady. It's one that leaves a glow in your heart and a smile on your lips." ~Sia Mckye: http://siamckye.blogspot.com/2009/12/my-unfair-lady-review.html

"With My Unfair Lady Kathryne Kennedy delivered another beautiful, sparkling and emotional story with unconventional, but lovely and lively characters. Her books are unique and in a league of their own, I am already craving for her next story!" ~Marissa's Book Lair: http://dream-mistress.blogspot.com/

"My Unfair Lady is a charming story about a girl who's trying to fit society's expectations so she can marry the man she wants, and the man who tries to help her, but eventually shows her that she's great just the way she is. Perfect for an evening in." ~Drey's Library: http://dreyslibrary.blogspot.com/2009/12/226-my-unfair-lady-by-kathryne-kennedy.html?utm_source=feedburner&utm_medium=feed&utm_campaign=Feed%3A+DreysLibrary+%28drey%27s+library%29

"I really enjoyed this book. It was an interesting take on Pygmalion and My Fair Lady. I would recommend this to anyone looking for a sequel to a non-Jane Austen book." ~Books Like Breathing: http://bibliophile23.wordpress.com/2009/12/09/my-unfair-lady-kathryne-kennedy/

"This is a fast paced, page turning, truly delightful story. It is sensual, but very entertaining. I would highly recommend this book."
Reviewed by AAR
"This is one of those rare historicals that will make it to your keeper shelf, but not stay there long! You’ll be rereading it, and telling others to read it. Fans of fun, witty, deeply engaging stories will find MY UNFAIR LADY a prize!"
Reviewed by Wendy Keel
http://mybookaddictionandmore.wordpress.com/2009/12/07/my-unfair-lady-by-kathryne-kennedy-a-review/

"Acceptance is a theme that prevails throughout and one Ms. Kennedy develops beautifully...a fun, fast paced read. One I enjoyed enough to finish in one sitting." ~Musings of a Bibliophile: http://www.bibliophilemusings.com/

"Overall, reading this book was a hilarious and wonderful experience, and an unforgettable escape from reality." ~ The Life (and Lies) of an Inanimate Flying Object: http://haleymathiot.blogspot.com/2009/11/review-my-unfair-lady.html

"My Unfair Lady was a fun read. It was a journey of love, trust and acceptance. Beautifully written." ~Anna's Book Blog: http://annavivian.blogspot.com/2009/11/arc-review-my-unfair-lady.html

"My Unfair Lady is a remarkable tale of love and acceptance." ~Romance Book Wyrm: http://romancebookwyrm.blogspot.com/2009/11/my-unfair-lady-kathryne-kennedy.html

"This Victorian romance will win you over faster than you can say the “Rain in Spain!”" ~Love Romance Passion: http://www.loveromancepassion.com/review-my-unfair-lady-by-kathryne-kennedy/

"My Unfair Lady is a very fun read with charming characters who can laugh at themselves with delight so that you take pleasure in their story while being pleasantly entertained, which for me has become this author’s trademark." ~Sandy M, The Good, The Bad, and The Unread: http://goodbadandunread.com/2009/11/30/7552/
Posted by Author Kathryne Kennedy at 6:00 AM 2 comments:

Email ThisBlogThis!Share to TwitterShare to FacebookShare to Pinterest
Labels: My Unfair Lady, Reviews

Wishing all my readers a magical New Year!

And hoping all your dreams come true.
All My Best,
Kathryne
Posted by Author Kathryne Kennedy at 8:03 AM No comments: