Revised and updated from a workshop I did several years ago, this post is all about using your characters to make your love scenes unique and intricate to your story. This is the second installment, with more to be posted over the next few months. If you’re a writer, this may help inspire you to write some of the most difficult scenes in your book: your sensual encounters. If you’re a reader, you will get lots of sneak peeks into the Relics of Merlin series, which is being re-released by Sourcebooks over the next few years.

This excerpt is from Double Enchantment. Jasmina is determined to show Sterling that she is a passionate woman, and fortunately for her, our hero understands that:

One black brow went up. “Are you sure?” he said through gritted teeth. He knew. He knew she wanted control, and his voice said it would probably kill him.
“Yes.”
He nodded. He would allow it anyway. Jasmina gave him a wicked smile and stood up between his legs. Her wet chemise molded to her skin; she could feel it sticking between the folds of her legs and across her breasts. Sir Sterling groaned.
“Stand,” she instructed, and he came out of the water so fast it poured over the sides of the tub and raced across the wooden floor. Jasmina rescued the bar of soap and started lathering her hands again. He closed his eyes and seemed to whisper some fervent prayer, but Jasmina was too busy studying every inch of his magnificent body to pay much notice. She ran her hands across his chest again, this time continuing down the sides of his waist to his slim hips, feeling the bone and muscle. A part of her felt she was discovering new territory, but another part of her seemed to know exactly what she would find. She shook off the confusion and concentrated on her task.
Lady Jasmina leaned forward and curved her hands over the small dips in the sides of his bottom, to the full, round back of it. She ran her slick hands over the twin mounds, feeling him tremble from the effort it took not to move. She refused to pity him. Her fingertips swept up the curves to his lower back, and she felt two more very small dips there. How absolutely wonderful.

What are your characters’ strengths?  How can you use them to guide their romantic encounter?  In the above scene, the heroine’s strengths are obvious, but the hero is even stronger.  He understands why Jasmina needs control and he allows her to have it, not always an easy thing to do. Try exploring the strengths of your characters and how they can inspire your love scene. Think about their hidden strengths as well, like Sterling’s understanding of Jasmina, and how you can use those to lead readers through a romantic encounter.

A deleted scene from ENCHANTING THE LADY

I don't often have whole scenes deleted from a book, and this was so long ago I'm not even sure why this scene never made it into the book. But it still captures a bit of a sense of wonder for me, and with the re-release of the Relics of Merlins series, I thought readers of Enchanting the Lady would enjoy it as an addition to Terence and Felicity's love story, so I'm sharing it here with you today: 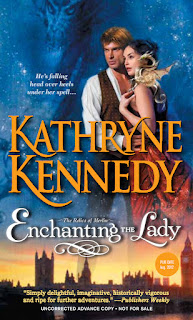 Felicity turned her head back around.  Terence strode to the end of the balcony and stopped.  Felicity opened her mouth, for surely what sat in the garden had to be an illusion.  But she knew down to her toes that her husband had brought her a real dragon.  Somehow, he’d managed to provide a steed beyond her wildest dreams.

While Terence walked down the stairs and onto a graveled path, she stared at the dragon, trying to memorize every glowing scale, every line of sleek muscle.  The dragon dwarfed the sculptured trees around it, making them appear mere child’s toys.  Its eyes stared at her, holding in their depths the wisdom of ages, and it snorted a stream of fire from its nostrils that appeared more of a theatrical display than a threat.
Felicity had to remind herself to breathe again.  The magnificent creature spread out a wing flat against the grass, and Terence strode up it as if it were another flight of stairs.  Her husband bounced a bit, the leather springing beneath his feet, and held out his hand to Felicity. She swallowed, raised her chin, and fled up the wing to her husband’s side. Terence guided her to sit down on the dragon’s back, in the space between its wings.
Daisy licked her cheek and she shared a look of wonder with her pet.  She would swear the little dragonnette on her shoulder smiled.
Felicity caressed the scales she sat on, her fingers smoothing into the ridges of the dragon’s hide.  Terence sat behind her, his legs half-bent, showing her how to hold on.  She leaned back against his warm chest, and her husband sighed into her hair.
His hands lay over hers, showing how to grip the underside of the scales for even more purchase. Which she gratefully appreciated a moment later.
The world lurched sickeningly and Felicity’s stomach flew up into her throat, and then with another few beats of the dragon’s wings they were in the air. Climbing higher.  So high that the air grew chill, and she leaned farther back into Terence for warmth.  No wonder the creatures were cold-blooded.
Stars shone brighter than she’d ever seen them; the moon grew so large she thought if she reached out she might be able to touch it.  But her fingers gripped a scale so tightly that she knew her hands would be sore on the morrow.
A small price to pay for the glory of flying on a dragon’s back.
Felicity felt a tingle of fear only once, when the dragon banked slightly, but when she felt herself slide, the creature twitched, setting her firmly back into her seat.  So each time it banked she just stared at the view below.  London by moonlight, with the Thames cutting through the middle of it, and tiny twinkles of lights from the houses below.  Buckingham Palace sat like a tiny jewel surrounded by parks and squares, and the tracks of the railroads crisscrossed the streets like some crazy jigsaw puzzle.
The dragon’s flight left the city behind, to soar farther and higher, to great mountain peaks and valleys in shadow.  Felicity’s eyes watered from the cold and because she dared not blink, in case she missed anything.  The frosty air numbed her toes and fingers and the tip of her nose, but she barely felt it.
When a dream comes true, who has time for thoughts of comfort?
She didn’t know how long they flew over England.  It seemed as if time hung suspended, but when they neared London again, she would swear that it had been just but a moment.
The dragon circled the city, as if it didn’t want their flight to end either, but it lowered with each pass, the mansions and buildings appearing larger each time, until Felicity wondered where on earth it would manage to land.
She expected one of the parks, but instead they hit a rooftop with a resounding thud, the dragon’s wings flapping in short bursts.  They had no room to walk down a wing, so the dragon lay down, and Terence jumped lightly off, as if he dismounted a dragon every day.  Felicity tumbled from her own perch in a tangle of silken skirts, her husband catching her in his arms like so much fluff.
Terence stood her on her feet and opened a door set in the roof.  She had no idea where they were, nor what manner of house would have a door in its roof, but she refused to leave the dragon until it left her.
The dragon beat its wings to rise and Felicity found herself flat on her bottom, the force of the wind slapping her down.  With a lurch the dragon’s claws left the rooftop, and she felt tears prick her eyes as she watched it soar upward again, until it was only a colorful speck in the black night.  And then it faded beyond her sight.
Posted by Author Kathryne Kennedy at 9:30 AM No comments:

Posted by Author Kathryne Kennedy at 3:41 PM No comments: