Have the first page of your manuscript critiqued today by Sourcebooks Editor, Deb Werksman!

That's right! My editor, Deb Werksman, is offering a free critique on our Sourcebooks Author Blog today! Post the first page of your Romance or Women's Fiction manuscript here: http://casablancaauthors.blogspot.com/2012/11/contest-first-page-critiques.html
Posted by Author Kathryne Kennedy at 10:42 AM No comments:


Revised and updated from a workshop I did several years ago, this post is all about using your characters to make your love scenes unique and intricate to your story. It has been posted in several parts over the last few months. If you’re a writer, this may help inspire you to write some of the most difficult scenes in your book: your sensual encounters. If you’re a reader, you will get lots of sneak peeks into the Relics of Merlin series, which is being re-released by Sourcebooks over the next few years.

The following excerpt is taken from the same scene I used from Enchanting the Lady for using a character’s flaws.  In this part, Felicity has been covering her nervousness with speech, and Terence takes advantage of it to pursue his own goal—to find the magical relic by discovering Felicity’s involvement with it:

“So, you like to talk?”  His voice had gentled to a purr.  “All right, we’ll talk.  Had any bad dreams lately?”  He started at the buttons on his shirt, slowly releasing them one at a time.
Felicity’s head spun.  Tonight of all nights he had to ask her about her dreams?  “No, not since the one I had at Fairview Manor.  Why?”
“It got you that time, didn’t it?  What was it, a fog of black, a slimy monster, a mist of knives?”  He stripped off his shirt and let it fall to the floor.  His skin gleamed gold in the candlelight, the hairs of his chest made a pattern that sharpened to a point near the top of his trousers.

So Terence is intent on making love to Felicity but at the same time he’s still pursuing his goal: finding the relic. Consider how your character’s goals can lead you through their love scene or create one for you.  This next excerpt is from Double Enchantment. At this point in the story, Sterling’s goal is obvious:

Frenzy gripped him and he rocked her up and down against his groin, pulled away and then plunged in again, seeking that threshold of pleasure that only Lady Jasmina could give him. And when it came he groaned with the force of it, half-aware that her own release shook her body in union with his.
“Let go,” he finally rasped. Jasmina tore her cramped fingers from the headboard and he gathered her into his arms, her legs still wrapped around him, his shaft still inside her as she sat on his lap. He kissed the hair away from her face and stroked her back. He couldn’t afford to show her any mercy. He would have her promises before she came back to earth. “You are mine now.”
“I know.”
“I will tell your father that we are to be married.”

in the Historical Fantasy/Paranormal category. See all of the Historical nominees here:
http://www.rtbookreviews.com/rt-daily-blog/first-wave-rts-2012-award-nominees-here-historical-romances

This has been a week of wonderful news! (BTW I'm using the list of RT nominees as my Christmas shopping list this year! Don't they look like fabulous reads?)
Posted by Author Kathryne Kennedy at 10:17 AM 2 comments: 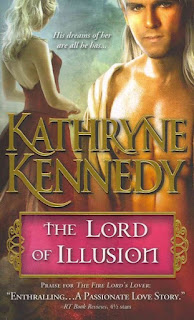 The Lord of Illusion. By Kathryne Kennedy. 2012. Sourcebooks/Casablanca, paper, $7.99 (9781402236549).
In her superb third fantasy-steeped romantic-suspense novel in the Elven Lords series, Kennedy follows outcast Drystan as he searches for the rainbow-eyed girl of his visions and finds enslaved Camille.

I'm proud to be included along with my fellow Sourcebooks author, M.L. Buchman, some of my favorite authors, Eloisa James, Susan Elizabeth Phillips, Lisa Kleypas and more. You can read the full list here: http://www.booklistonline.com/ProductInfo.aspx?pid=5668426&AspxAutoDetectCookieSupport=1
Posted by Author Kathryne Kennedy at 9:30 AM 4 comments: