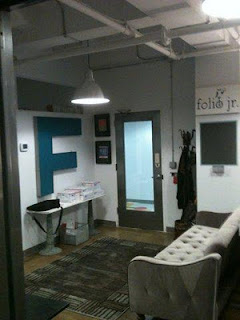 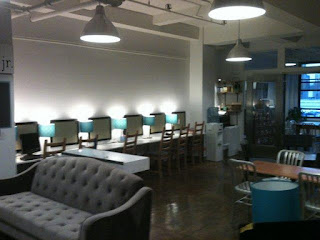 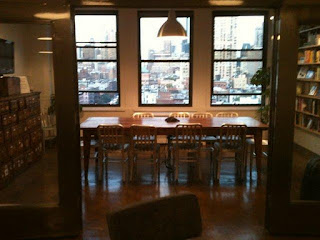 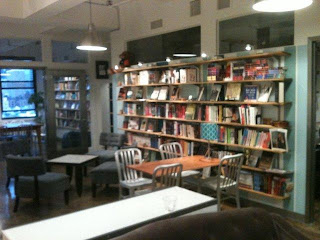 Sharing some pictures of my literary agent's new offices in New York. If you are querying Folio Lit, you might want to note the new address:

And of course, I would recommend my agent, Paige Wheeler, who is absolutely fabulous!
Posted by Author Kathryne Kennedy at 9:37 AM No comments:

Email ThisBlogThis!Share to TwitterShare to FacebookShare to Pinterest
Labels: Miscellaneous

Today my hero AND heroine are fighting a dragon...

ah, the life of a fantasy writer is grand!
Posted by Author Kathryne Kennedy at 8:42 AM No comments:

Email ThisBlogThis!Share to TwitterShare to FacebookShare to Pinterest
Labels: Miscellaneous

Is a writer's life really glamorous?

Movie Star: Wakes up and leans over to kiss Brad Pitt, who looks deliciously tousled lying there beside her.

Author: Wakes up and reaches for her laptop, before she loses that state where dreams still feel like reality.

MS: Can’t resist the urge to wake Brad and indulge in a bit of morning sex. What woman in the world could deny the opportunity? Sighs with delight when the encounter is over.

A: Reads through the last scene of THE LORD OF ILLUSION, where her hero, Drystan Hawkes, makes passionate love to her heroine, Camille Ashton. Sighs with delight.

MS: Watches her nanny fix breakfast for her adopted children, and ponders the addition of another child to the family. Money is certainly no obstacle.

A: Grabs a chocolate chip cookie and a glass of milk for breakfast while musing about adding a secondary character to THE LORD OF ILLUSION. A young girl who makes talking dolls out of sticks and mud. Word count is not an obstacle.

MS: Skips breakfast, and starts her morning regime of stretches followed by vigorous exercise and beauty treatments. She makes her money off her looks and must maintain them.

A: Her fingers start to loosen up as they get their usual morning exercise flying over the keyboard. Her creativity makes her money, and she doesn’t have to worry about her looks. Pops a chocolate into her mouth for inspiration.

MS: Drives her new BMW to the movie set, the wind in her hair, her favorite song on the radio.

A: Needs a change of scenery for additional inspiration. Moves her laptop outside to the patio and it works. The next scene for THE LORD OF ILLUSION springs into her mind: Camille looking exceptionally beautiful as she flies on a dragon's back, the wind blowing through her hair.

MS: Throws herself into her new role as a secret spy on a daring mission of intrigue, so into the part that she half-forgets her own identity, especially when she wields her gun as they escape the evil villain.

A: Half-forgets her own identity as she empathizes with Drystan when the magical scepters torture him once again with visions of fire and blood and death.

MS: The love scene with her co-star consumes her. Who can blame her when Mathew McConaughey is kissing her?

A: The love scene where Drystan uses his magic of illusion to seduce Camille consumes her. Who can blame her when the imagery seems so real?

MS: The set workers burst into applause as she finishes her scene. The director takes her to her favorite restaurant for lunch. An expensive place, but she’s certainly worth it.

A: Her dear husband of thirty years taps her on the shoulder, knowing that when she gets caught up in her book she’ll forget to eat if he doesn’t remind her. He doesn’t mind taking the time from his day to make her lunch; he thinks she’s worth it.

MS: Fatigue has lined her face. She cannot afford for the camera to capture it, and calls it a day.

A: Fatigue slows her brain. She can’t afford a mistake in continuity, and calls it a day.

MS: Spends the evening with her loving family, content to leave behind the fantasy of her profession for the reality of a warm hug and a hot bath.

A: Spends the evening with her loving family, content to leave behind THE LORD OF ILLUSION for today, but eager to pick it up again first thing next morning. But right now she needs a warm hug and a hot bath.
Posted by Author Kathryne Kennedy at 8:46 AM 4 comments:

Email ThisBlogThis!Share to TwitterShare to FacebookShare to Pinterest
Labels: Fun Stuff, The Lord of Illusion

Today I'm at my group blog talking about spooky ghosts! I'd love for you to join me at:
http://casablancaauthors.blogspot.com/
Posted by Author Kathryne Kennedy at 6:06 AM No comments:

Email ThisBlogThis!Share to TwitterShare to FacebookShare to Pinterest
Labels: Enchanting the Beast, Holidays, The Relics of Merlin

Thank you, Grace, for the fabulous review! I'm posting a snippet of it here, but be sure to stop by Books Like Breathing to read the full review!

"I loved the world building, the fantasy, the romance and, of course, the conflicts between Cecily and Giles...I absolutely can’t wait for the next book in the series. I am not usually the biggest fan of fantasy romances but this series is amazing."

http://bookslikebreathing.blogspot.com/2011/09/review-lady-of-storm-by-kathryne.html
Posted by Author Kathryne Kennedy at 2:29 PM No comments: