Revised and updated from a workshop I did several years ago, this post is all about using your characters to make your love scenes unique and intricate to your story. It has been posted in several parts over the last few months. If you’re a writer, this may help inspire you to write some of the most difficult scenes in your book: your sensual encounters. If you’re a reader, you will get lots of sneak peeks into the Relics of Merlin series, which is being re-released by Sourcebooks over the next few years.

I think writing is like weaving, where you have to incorporate all these different strands into your work, and that removing any thread will make the entire thing fall apart.  So in all of the examples I’ve shown in the past few posts, there’s an element of conflict and plot as well.  Both their external (plot) and internal conflict can lead you to a unique love scene. In Enchanting the Lady, Felicity is trying to overcome her feelings of inadequacy (internal conflict), while Terence is trying to trust her (internal) and find the relic (external conflict).  In Double Enchantment, Jasmina is trying to prove that she’s just as passionate as her magical twin (internal) and Sterling is determined to make her marry him (internal).  And they’re both using each other to find the relic (external).  In Enchanting the Beast, Philomena is insecure about her age (internal) and Nico fears the nature of his beast (internal).  They are both trying to solve the mystery of Grimspell castle’s ghosts (external). For another example, I’ll use an excerpt from my upcoming brand new release, Everlasting Enchantment, to reflect the use of plot and conflict. Gareth is trying to seduce Millicent to break his curse (external), but finds himself actually falling in love with her (internal). Because she’s aware of the curse and his goal (external), she doesn’t trust him (internal), but finds herself wanting him all at the same time (internal), and the nature of her beast is fighting within her as well (internal). As you can tell, there’s a lot of conflict going on within this love scene:

Gareth groaned and pressed closer to her. She could feel his muscles tremble as he fought to keep his touch gentle.
Millicent buried her fingers in his hair and showed him she would not break. Perhaps…perhaps the moment she had truly known she would make love to him was when she had thought he had died. When she had felt such an overwhelming grief that she would have blindly rushed forward to save him if it hadn’t been for Nell reminding her that he was immortal.
Or was he?
Millicent easily pulled his face away from hers, heard him catch a breath at the reminder of her were-strength. “I cannot break your curse. I do not have enough love in my heart to do such a powerful thing.”
“I do not care.”
“So you said. But what if…what if it were possible? Will time catch up with you and turn you to dust?” Her voice cracked, betraying her emotions, her fear of making the wrong choice.
His eyes looked like twin pools of midnight, the light blue barely discernable. “I do not care.”
“I will lose you either way.”
“Are you sure you want to keep me?”
“I—“ Millicent frowned. She did not know what she wanted beyond this moment.
He slid his finger across her cheek. “Merlin’s spell bedamned. I will make love to you for no other reason than because I want to. Because I have to. Because I need to make you a part of me, if only for one night.”
And Millicent’s beast, who had lain strangely quiet within her, sensed her weakness and suddenly rose up, demanding this man for her mate. She could not stop the low growl that sounded in the back of her throat. Could not help but pull his face to hers once again, kissing him with a fierceness that she feared would startle him.
But Gareth only moaned, met her fierceness with his own, pushing her back against the bedding, his tongue tasting the inside of her mouth, his hands roaming over the silk sheet covering her; exploring, kneading, demanding.
Millicent did not know how he managed to keep her senses overwhelmed and remove his clothing at the same time, but within moments she felt his naked body slide next to hers, his skin warm and smoother than the silk. He felt perfect, his muscles molding against hers, as if they somehow fit like a puzzle into one form. And yet…a flutter of anxiety twisted through her and she fought the urge to push him away. She wanted him, yes, but feared him all at the same time.
Her beast growled, chiding her for being a coward. But the animal lacked the vulnerabilities of a human heart, acting on instinct and need alone. Her beast had always been a part of her, even in human form, and she had used that side of her nature to save her life and sanity more than once. But she had always controlled the inclinations of the were-cat.
Until now.

Consider your external and internal conflicts and allow your characters to bring them into their love scenes with them.  Think of all the different emotions they’re feeling and how it affects the intimacy of the scene, and then use that to guide you through their very own unique, special moment.

Congratulations to DeAnn T., from Sanford, NC, who won the last contest for the re-release of Double Enchantment for a genuine star-shaped garnet necklace. I've decided to run another 'tell a friend' contest since it was such a hit, but this time I'm offering a heart-shaped natural garnet necklace valued at $320.00. It's easy to enter, and I love thanking my readers, so make sure you check out how to enter on my website: http://www.kathrynekennedy.com/contest.html 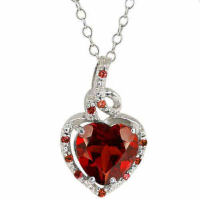 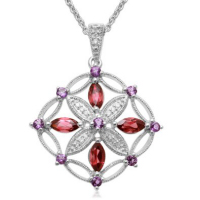 Posted by Author Kathryne Kennedy at 8:53 AM No comments: