Would you like me to autograph your Kindle e-book?

I think Amazon has the bugs worked out, so wanted my readers to know that I have set up a page for you to request an autographed cover page for your Amazon Kindle e-book. The link to my page is here:

I sign with my mouse, so my signature is wonky, but I figured you'd want a real wonky one, rather than a scripted one from a standard handwriting font. :}
Posted by Author Kathryne Kennedy at 1:53 PM No comments:

Take a sneak peek at the cover for THE LORD OF ILLUSION... 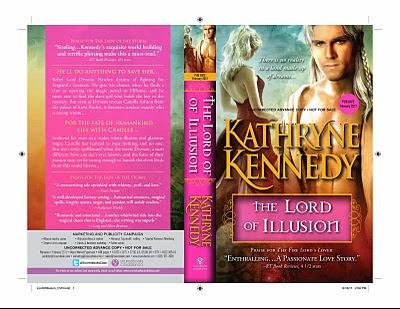 The Advanced Reading copy cover for book 3 in The Elven Lords series. Will it pop off the shelf, or what? :}
Posted by Author Kathryne Kennedy at 12:01 AM 6 comments:

Email ThisBlogThis!Share to TwitterShare to FacebookShare to Pinterest
Labels: The Elven Lords, The Lord of Illusion

Why I Decided to Combine Historical and Fantasy

I decided to combine historical and fantasy because I love both of the genres. I love the pageantry of history and the opportunity to write scenarios that fall within the era: arranged marriages, alpha heroes, damsels in distress (even though my damsels usually do their own rescuing), court intrigue, etc. And I love fantasy, and the opportunity to create a magical world that alters the boundaries of the historical backdrop.

And the ability to add magic to my romance inspires my imagination.

I’d like to share an excerpt from book one of THE ELVEN LORDS series, THE FIRE LORD’S LOVER, to show how the historical, fantasy and romantic elements combine for me. In the scene, Lady Cassandra Bridges has just completed the ceremony for her arranged marriage to Dominic Raikes, the elven lord’s half-breed son. Trained as an assassin to murder his father, Cass has no intention of even liking her husband, and is shocked by the way she reacts to his kiss, which is also reflected in the magical ring Dominic gifts her with.

supposed she’d have to get used to that idea. Although

of his beautiful eyes. She’d hoped she could use

the general to gather information about the elven, but

used. Indeed, when his eyes met hers for a moment,

a shiver of dread went through her.

The few times she’d visited him, he had treated

her with a disinterest bordering on contempt. She’d

foolishly thought that when she became his wife that

him not at all. Faith, how would she manage to share

his bed tonight? Best not to think of that.

She blanched as her new husband slid a ring on

her finger. A band of gold with a rose carved atop it.

But the rose looked so real, the edges of the petals

as delicate as the true flower. Cass couldn’t resist the

impulse to bring it closer to her face, then nearly

jumped when the petals curled closed, changing the

carving to a tight bud.

He’d given her a ring crafted with elven magic.

Her eyes flew up to his in alarm.

you,” he muttered, a note of exasperation in his

velvety voice. And then he lowered his head and

kissed her, signaling an end to the ceremony.

Cass’s heart flipped over. She stood quite frozen,

unsure of what had come over her. The general

had done nothing more than press his lips to hers.

And her entire body had shivered. From that one

As the onlookers broke into polite applause,

Mor’ded leaned close to his son and said, “Surely the

champion can do better than that.”

She watched her husband glance at his father. Saw

his face harden with challenge. Then the general

wrapped his arms around her and roughly pulled her

against his chest, and Cass could only pray.

Her new husband kissed her again. But this time he

kissed her like Thomas had, bending her backward in

his arms, moving his mouth over hers as if he sought

to eat her alive. But the experience was totally unlike

the one she’d shared with Thomas.

The world seemed to fall away. Cass became aware

arms. The heat of his mouth, the fire that ran through

her body, the sheer exhilaration of the taste of him.

Her senses heightened. She felt her breasts tighten

and strain toward him. Felt a wetness between her

legs that frightened and excited her all at the same

time. His tongue pressed against her lips, and lacking

any experience of what to do, she opened her mouth

and he invaded it, stroking and tasting until she just

Her new husband abruptly let her go and set her

away from him. Cass swayed. The applause in the

room had risen in volume, and she blushed again to

realize she’d behaved in such a manner in front of

an archbishop, half the country, and in the house of

the Lord, no less. She couldn’t account for what had

General Raikes gave his father a heated look. “Will

When Dominic took her hand and led her back

down the nave, Cass could do nothing but weakly

follow. But she noticed the rose in her ring had come

unfurled, spreading out into a glorious open blossom.

With the opportunity to work with so many elements that I love, it was natural for me to combine history with fantasy and romance. And I think what it comes down to for the writer is to write what you love because it will be reflected in every line of the story and will truly become the book of your heart.

All My Magical Best,

Posted by Author Kathryne Kennedy at 12:02 AM No comments:

Email ThisBlogThis!Share to TwitterShare to FacebookShare to Pinterest
Labels: The Elven Lords

Check out this fan video of THE FIRE LORD'S LOVER!

I found this video linked to mine on Youtube. I thought she did such a lovely job of merging the Georgian Era with an Elven Fantasy world, that I had to share with my readers.

Posted by Author Kathryne Kennedy at 9:07 AM No comments:

My publicist just shared the amazing news with me this morning:

http://www.booklistonline.com/ProductInfo.aspx?pid=5010705&AspxAutoDetectCookieSupport=1#.TnJOCtysScs.twitter
Posted by Author Kathryne Kennedy at 9:53 AM 2 comments:

Email ThisBlogThis!Share to TwitterShare to FacebookShare to Pinterest
Labels: The Elven Lords, The Lady of the Storm, Top Ten

Email ThisBlogThis!Share to TwitterShare to FacebookShare to Pinterest
Labels: contest, FOR WRITERS

Did you request an autograph for your Kindle?

I have several requests pending to autograph Amazon Kindle books. Unfortunately, I'm getting an error report when I try to send them. This is a new feature, and it's natural to expect some bugs. :} I promise I'll get them processed as soon as Amazon fixes the problem. Thank you for your patience!
Posted by Author Kathryne Kennedy at 4:18 PM No comments:

Once Upon a Romance, Books and Makeup, Deb's Book Bag, and One Book Shy review THE LADY OF THE STORM

My publicist forwarded me on these reviews, and I thought I would celebrate them on my blog today:

I was drawn into the story and had to keep reading to make sure both Giles and Cecily survived each peril that befalls them. Kathryne Kennedy’s ability to weave magic into a real place and time is a large part of what makes this story so engrossing. I am happy to report the third title will be forthcoming so keep a watch at your local bookseller for the latest as it becomes available. Reviewer: Robyn Roberts
http://www.onceuponaromance.net/LadyOfTheStorm.htm

Lovers of fantasy novels and readers of romance will find plenty to love in this well-written and imaginative novel. It will transport you to a magical world of magic and adventure and romance. I absolutely loved it! http://booksandmakeup.blogspot.com/2011/08/michelles-review-lady-of-storm-by.html


There is something for several different kinds of readers in this book. There is adventure for those who like a good battle now and then. There are tender moments and steamy situations to keep the romance readers interested and there are is magic! The world Kennedy creates is magical itself, but it is peopled with magical beings and abilities. If you enjoy a good fantasy read, you just can't miss this one! I recommend it to all my readers, from the romance fans to the paranormal readers. If you've never read a book like this one, this is the place to start, Kennedy is at her best in this series. One of the best books I've read this year! http://debsbookbag.blogspot.com/2011/08/review-lady-of-storm.html

I highly recommend this book to those who enjoy a good adventure that is full of romance and intrigue. The large dose of Elven magic and a bit of humor just add to the mix making this a must read for old fans of Kathryne Kennedy and readers like me who are thrilled to have discovered her finally.http://onebookshy.blogspot.com/2011/08/review-fire-lords-lover-by-kathryne.html

Posted by Author Kathryne Kennedy at 8:22 AM 4 comments: