A Must Read: THE FIVE DEATHS OF ROXANNE LOVE By @ErinQuinnAuthor


I must start with a disclaimer: Erin and I critique each other’s work. After reading her first few novels and falling in love with her writing, I made it my mission to wrangle her into working with me, and I’ve been grateful for her partnership over the years. Her work often reads like poetry, and she does dark novels with a masterful pen. Being on medical leave, I finally got the opportunity to read through THE FIVE DEATHS OF ROXANNE LOVE once again. (It’s different when reading as a critique; I’m working, and on my computer. Reading the published printed version of the book is just sheer relaxing pleasure.) Anyway, I knew I wanted to write a blog entry one day highlighting some of her words that I found particularly brilliant, evocative, or sensual, so I marked the pages, and I’m sharing them with you here today:

Page 341
“Maybe that’s all you need to know,” he said against her lips. “That I’ll always be waiting for you. You’re not alone in this, angelita. Maybe we do it together.”

Page 295
He seemed overwhelmed by the responsiveness of her body beneath his, overawed by how it felt to make love to her. And for just a moment, he looked lost.

Page 278
A small pool positioned near the rental office and clubhouse glittered, surface as flat as glass, chairs at precise attention around the perimeter. All of it vacant and looking too serene to be real. It buzzed his already stretched nerves.

Page 231
“The Beyond, Reece. Heaven, hell—Hades, Elysium. Call it what you want. But in the end it’s the same. That door lets darkness seep in. And lurking in all those shadows, just waiting for a chance to scuttle through that opening, are demons.”

Page 221
Her breath was shallow. So was his. He held her body so close that their lungs filled in tandem, each breath taking the space vacated by the other.

Page 212
He leaned back against the pillows and tugged her down next to him. She resisted for about half a second before laying her head on his shoulder. He smelled of soap and cotton and Santo. She pressed her nose against him and breathed him in.

Page 211
Still caught in Santo’s gaze, she said good-bye and set the phone on the nightstand beside her. The air felt thin, dissipated by the man who moved like a jungle cat through it, bare feet padding against the wooden planks.

Page 195
He heard it again, a deep, menacing reverberation that seemed to come from just behind the boulder, and yet in front of it and all around it. The shadows gobbled the sound and spat it out in a million small, vibrating pieces.

Same Page
The air grew so still it seemed to thin until he could see the particles within, silver on gray, slate on black.
But then it shifted and became thick. Sulfurous. Suffocating.

Page 188
Reece had only ever seen the hours before dawn from the other side of midnight, when the rising sun meant the end of a good night. He’d never awakened early to watch it evict the stars and muscle down the moon like he did now.

Page 180
His palm felt warm and gentle against hers, his touch a low-frequency hum in her system.

Page 126
Her heart labored, so stressed she couldn’t tell if it had sped up or slowed down. The eerie stillness stretched hard and tight over them, an imperceptible cellophane wrapper that trapped them. Panic made her short of breath; terror convinced her that she’d find the oxygen siphoned away from their dubious refuge if she tried to fill her lungs.

Page 124
The sound of dragging footsteps coming up the other stairway—the one behind them—echoed just as the strident bell of the elevator binged ahead. She didn’t look back. She didn’t need to. She could sense the creature on the stairs. Could it sense her, too? Did she carry a scent that demons could sniff out? Was the one on the stairs testing the air even now and asking, Where are you?

You probably have your own favorite passages after reading this book; these are my own personal ones. And if you haven’t already read it, you can get THE FIVE DEATHS OF ROXANNE LOVE HERE:
http://www.amazon.com/Five-Deaths-Roxanne-Love-ebook/dp/B00A27XBAW/ref=sr_1_3?s=books&ie=UTF8&qid=1411600738&sr=1-3&keywords=erin+quinn
And be sure to preorder the sequel, THE THREE FATES OF RYAN LOVE

As Always,
My Magical Best,
Kathryne 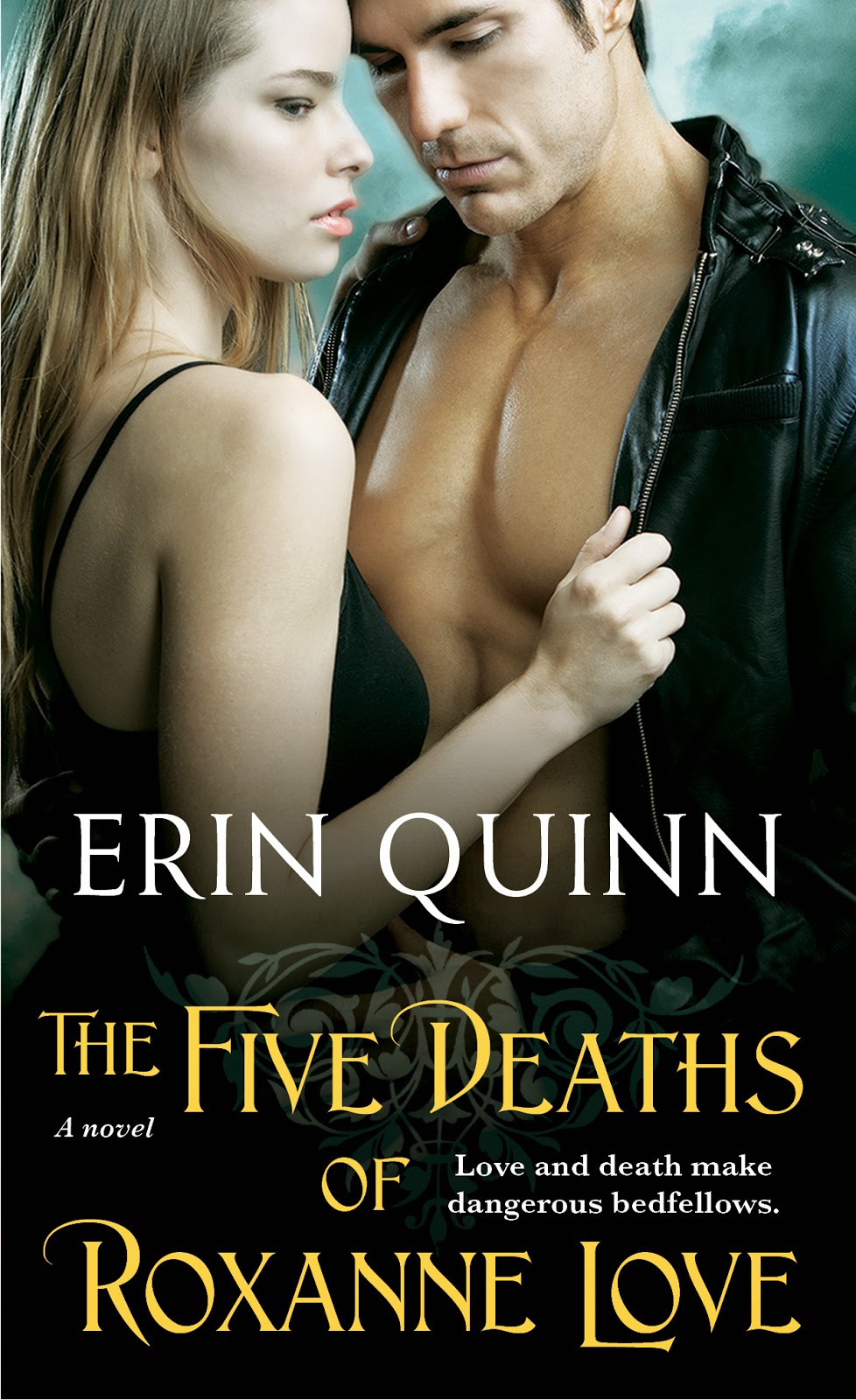 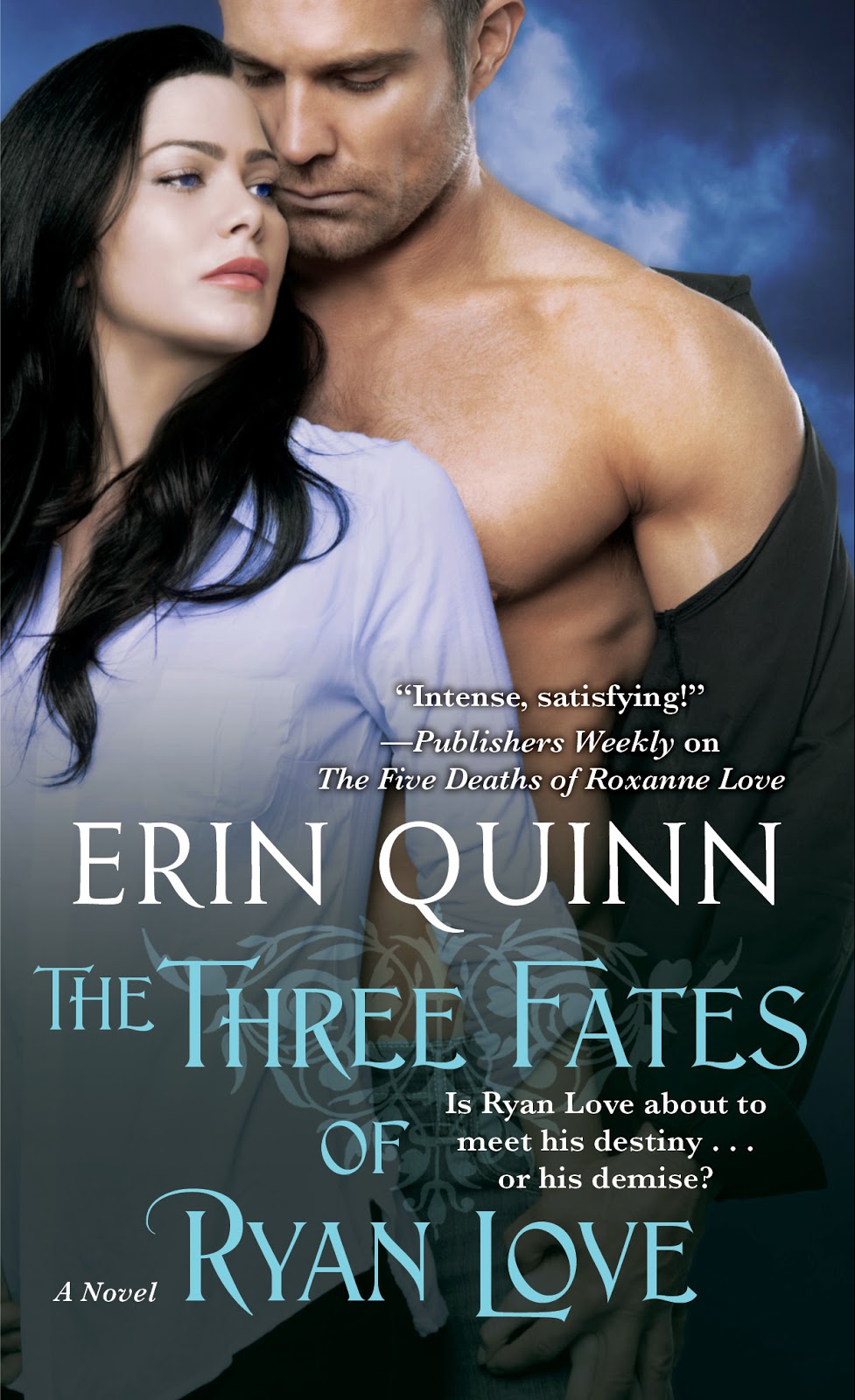 Posted by Author Kathryne Kennedy at 7:00 AM No comments: