LAST CHANCE to win a copy of EVERLASTING ENCHANTMENT: http://www.joyfullyreviewed.com/22604

Stop by and say hi, and you're entered to win! This is the last stop on my blog tour where you'll have a chance to win a free copy of EVERLASTING ENCHANTMENT, so good luck to all!

Posted by Author Kathryne Kennedy at 1:15 PM No comments:

Stop by, leave a comment, and you're entered to win!
Posted by Author Kathryne Kennedy at 9:11 AM No comments:

Everlasting Enchantment.
Kennedy, Kathryne (Author)
Dec 2013. 384 p. Sourcebooks, paperback, $7.99. (9781402269912).
Underneath Victorian London lies a labyrinth of tunnels and caverns housing a shadow city, the only home Millicent Pantere, a were panther, has ever known. All members of the nobility possess magic, from the all-powerful queen to the less-gifted shape-shifting baronets. By holding hostage the only person Millicent loves, Duke Ghoulston forces her to go above ground and into London society to find a mysterious relic upon which Merlin cast a revengeful spell centuries earlier. She discovers a group of ladies who are hoping to be the one that the relic, a bracelet, will cleave to and at midnight bring the man of her dreams into her life for a night of exquisite lovemaking. The man who is imprisoned in the bracelet’s stone is Sir Gareth Solimere, of King Arthur’s Round Table, who made Merlin a cuckold. For centuries his fate has been to make love to each woman who dons the relic, looking for his own true love to break the spell. The latest in Kennedy’s The Relics of Merlin series (Double Enchantment, 2013) features exquisite world building, making this richly imagined adventure appealing to fantasy fans and romance readers.
— Diana Tixier Herald


The brand-new fourth book in the Relics of Merlin series is finally in bookstores, and you can win one of two autographed ARC’s by commenting on my blog! Just leave a comment below, then check back on Saturday, Dec. 14th to see if you won, and send me an email (I’m sorry, but I can’t be responsible for tracking down the winners) with Blog Contest in the subject line to: kathryne@kathrynekennedy.com. I am also listing my blog tour stops that are remaining, so if you don’t win an ARC here, you can win a copy of the book by visiting the other blogs on the date shown on the tour, and leaving a comment there (or any other instructions for chances to win that the blog owner may make available to you). I am also running a new contest on my website http://www.kathrynekennedy.com/contest.html
where you can win a fabulous moonstone necklace, the jewel in the relic in Everlasting Enchantment.

12/18 Reading Between the Wines http://www.readingbetweenthewinesbookclub.com/

Powerful Magic is Afoot …
Millicent Pantere has lived her entire life in the notorious London Underground. She cares nothing for the problems of the crown or the intrigues of society. But the ladies of the realm are acting strangely, and Millicent is coerced into tracking down the rumors of a mysterious man—a magic man who comes in the night and disappears at dawn.

And So the Hunt Begins…
Millicent's search leads her to one of Merlin's legendary relics and the seductive knight whose fate is bound up with it. Centuries ago, Sir Gareth Solimere made the mistake of seducing the wrong woman, and he has been trapped ever since by a diabolical curse. He's looking for the one who can break the enchantment—but in this world, there is no love without betrayal...

ABOUT THE AUTHOR
Kathryne Kennedy is a critically acclaimed, bestselling, award-winning author of magical romances. She’s lived in Guam, Okinawa, and several states in the U.S., and currently lives with her wonderful family in Glendale, Arizona. For more information and ongoing contests, please visit www.kathrynekennedy.com. 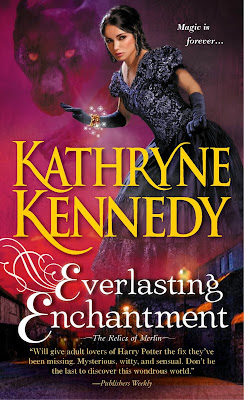 Posted by Author Kathryne Kennedy at 9:43 AM 18 comments:

Kennedy, Kathryne. Everlasting Enchantment. Sourcebooks Casablanca. (Relics of Merlin, Bk. 4). Dec. 2013. c.284p. ISBN 9781402269912. pap. $7.99; ebk. ISBN 9781402269929. PARANORMAL romance
Coerced by the Duke of Ghoulston to find one of Merlin’s legendary relics, were-­panther Millicent Pantere, a shape-shifter immune to magic, must attend a formal ball in order to achieve her goal. Lady Chatterley (yes, that Lady Chatterley) supposedly has the sought-after bracelet, and when Millicent ends up being “chosen” to wear it—and treated to a night of mind-blowing passion with Gareth Solimere, a curse-enslaved knight trapped in the relic—she soon finds herself involved in a dangerous, potentially lethal situation. VERDICT Magic-infused, highly sensual, and over-the-top creative, this fascinating, fast-paced Victorian adventure has been long awaited by series fans, who will be overjoyed. Kennedy (The Lord of Illusion) lives in Glendale, AZ.

Posted by Author Kathryne Kennedy at 3:02 PM No comments:

Enter to win an ARC of EVERLASTING ENCHANTMENT: http://casablancaauthors.blogspot.com/

Posted by Author Kathryne Kennedy at 2:22 PM No comments:

Join me tonight on Facebook for chat and prizes! https://www.facebook.com/sourcebooks

My prize is a replica of Gareth's sword from Everlasting Enchantment! 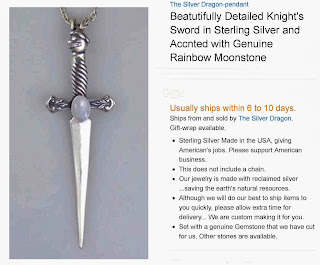 Posted by Author Kathryne Kennedy at 12:00 PM No comments: