Why did I change THE RELICS OF MERLIN SERIES with EVERLASTING ENCHANTMENT?


As summer approaches along with the desert heat here in Arizona, it’s a pleasure to stay inside in the air-conditioning and write. This also includes promoting my current releases. In the Relics of Merlin series, Double Enchantment was just released last month, and I have the brand-new book, Everlasting Enchantment, scheduled for release in December. I have a new contest on my website to win a garnet necklace for Double Enchantment (you can check it out at http://www.kathrynekennedy.com/contest.html), and I will be launching many more jewelry contests for Everlasting Enchantment, so if you haven’t joined my newsletter yet, now is a great time.
Although I’m excited for the release of Everlasting Enchantment, I’m also wondering how my readers will react to this new book. In all three previous books, the shape-changer was always my hero. My heroines were magic-users and despite how this alters power in my magical world, they were still constrained by the values of the Victorian era. Women were given a place, and few had the stamina to fight against their roles. In order to be true to the time period of the era, the personalities of my heroines reflected how they were raised. Although they were the unusual ones who fought against the mores of the era, I still wondered what it would be like to change up the scenario.

What if my heroine was the shape-shifter, and she was raised in the Underground, where little regard was given to the social strictures of the London above. Millicent would be tough. Maybe too tough, especially if she was a were-panther. And therein lay my biggest problem. How would I ever find a hero tough enough for her, and yet with a kind enough heart to break through her rough exterior?

He had to be very special, this hero. And really, really good at seducing a woman. But it would still be a hard task…so what if they were both thrown into a situation where their survival depended on them making love? And so a cursed Knight of the Round Table was born. Sir Gareth has been trapped in a relic for centuries, doomed to imprisonment until he finds his one true love…or so he thinks. And the relic he’s cursed inside finds its way on my heroine’s wrist, and the only way it’s coming off is if Millicent makes love to the Knight.

But obstacles stand in their way, of course, along with a were-vamp named Selena and a were-lion named Sir Harcourt…and the entire court of the Master of the Hall of Mages.
But there will be others who will help them find their Happily-Ever-After. An old were-firebird named Nell, a little house hobgoblin called Parsnip, a were-bear and a were-flamingo…and the Queen of England, herself.

I’m looking forward to what my readers think about this change in the series. And today I’m giving you all a sneak-peek at the fabulous cover Sourcebooks created for Everlasting Enchantment. 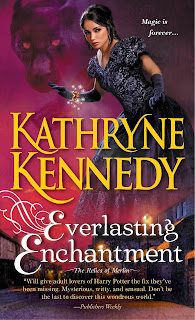 Posted by Author Kathryne Kennedy at 9:30 AM No comments: