The Re-release of ENCHANTING THE BEAST is in bookstores, and I'm giving away lots of prizes at: http://casablancaauthors.blogspot.com/

Stop on by and read some of the reasons why this book is one of my favorites...and leave a comment to enter to win a chance at four different prizes! http://casablancaauthors.blogspot.com/ 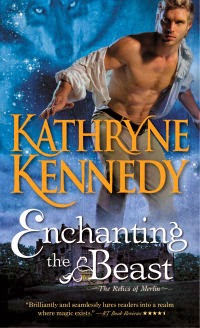 Sir Nicodemus Wulfson is haunted by memories of murder--and ghosts. He brings in a ghost-hunter in the form of celebrated spiritualist Lady Philomena Radcliff, and promptly, all hell breaks loose. Is Phil a threat to his already suffering family? Or can Nico trust his burgeoning attraction to her?

IS IT HIM SHE SHOULD FEAR?

Lady Philomena has resigned herself to a life of spinsterhood performing seances for the aristocracy--until she meets sexy young were-wolf Sir Nico. She agrees to try ridding his castle of its increasingly restless spirits. But there are more mysteries within Grimspell Castle than even Nico is aware of, and when a local girl turns up dead, Phil wonders if she's risking her life as well as her heart.

"The heartfelt and well-rounded characters will easily become some of your favorites."
Night Owl Romance, REVIEWER TOP PICK

"Once again Ms. Kennedy weaves her magic and pulls the reader in from the first page."
The Good, The Bad & The Unread, A+


ABOUT THE AUTHOR
Kathryne Kennedy is a multi-published, award winning author of magical romances. She’s lived in Guam, Okinawa, and several states in the U.S., and currently lives in Arizona with her wonderful family—which includes three very tiny dogs. She welcomes readers to visit her website where she has ongoing contests at: www.KathryneKennedy.com.

Scroll to the bottom of the blog to check out my book videos!